*****NOTE: this article went up on 24th November 2020, but due to matters outside my immediate control, had to be taken down. Thankfully those matters have now come to a conclusion, and I’m able to offer this post to you in full and unredacted.*****

A lot has been written about News Corporation’s character assassination campaigns. They can provide a potent disincentive for people to enter public life and express views that differ from the papers’ positions. Names like Yassmin Abdel-Magied and Ros Ward are synonymous with the huge consequences News Corporation exacts on people expressing certain views in public.

For over two years I’ve mulled over how I’d talk about the time this happened to me. I’ve contemplated discussing the rubbery, weaponised morality these campaigns use, and how the targets are held to a disingenuous interpretation of their own standards. I’ve wanted to explore how these articles’ analysis rarely goes deeper than accusing the targets of hypocrisy and moral inconsistency, how they rarely have a higher mission than simply humiliating people and using them as a vehicle to demolish and demonise left wing viewpoints. But maybe all that can come later. After 24 months of agonising over how I would respond, I’ve decided the first thing I should do is simply explain what happened, and how it affected me.

In November 2018, I was working as an advisor to Victorian Greens MP Lidia Thorpe in the leadup to the State Election. I received a message from a friend, who told me an ALP campaigner had approached him in the early voting queue and said “that Paul guy who works for Lidia is going to have a bad week”. In reality, I was about to have several bad years.

Either he, some other campaigners, or someone else entirely — I still can’t bring myself to really delve into this — had searched my Twitter account to find posts that could be compiled and shopped around to journalists — what some have called a ‘shit sheet’. The tweets they found were a mix of things. Some were ironic jokes which, presented out of context, could be made to look like they were expressing the opposite of their intention. Others were serious posts made in the context of, for example, a discussion on ABC’s Q&A about pornography and sexuality in society, which again, presented out of context and scattered in among the other material, helped create a profoundly untrue and defamatory picture of what I believe and who I am as a person.

In one example, people were reacting to an appalling article which tried to minimise child exploitation material and depict its consumers as innocent victims. In response to screen shots of the article, I posted a parody to demonstrate how sick and plainly wrong the article’s premise was. Here is my contribution in full context: 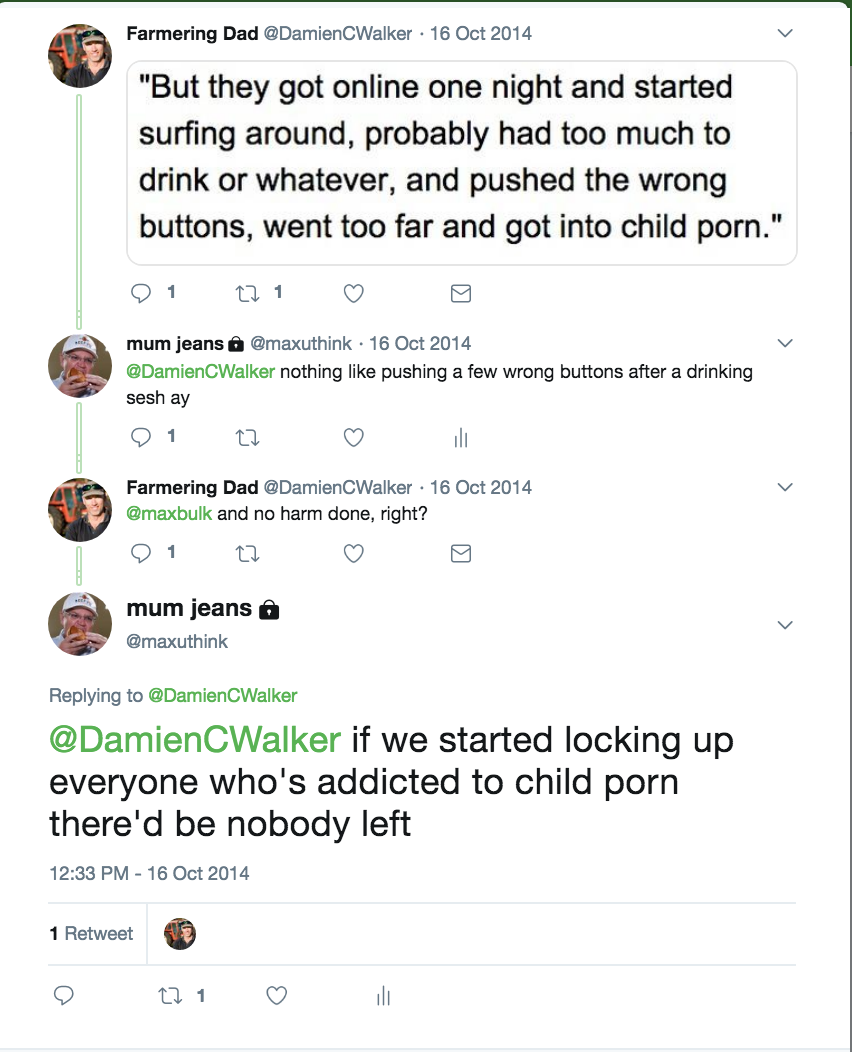 That last post, stripped of that context and placed in isolation, looked very bad indeed.

They found a post I made using the hashtag #TweetLikeHelen, where hard-left writer and journalist Helen Razer had asked people to parody her posting style. My attempt simply fused together some of her catchphrases of the time, in her typically vulgar and irreverent style. Despite being empirically a pretty bad tweet, it earned the coveted Helen Razer retweet, but without knowing any of that context, it just looks appalling.

Armed with the ‘shit sheet’, the campaigner made failed attempts to arouse the interest of ABC and The Age, and eventually found a receptive audience at the Murdoch tabloid the Herald Sun. The resulting article quoted the child abuse and #TweetLikeHelen posts, and described posts that discussed pornography and sexuality. It characterised me as a misogynistic, sex-obsessed deviant with shameful attitudes towards child abuse, by way of making a broader attack on the Greens party for a culture that allows such a person to advise one of their MPs. At a time when a number of stories were coming out about the party’s mishandling of sexual assault and harassment claims, it was an easy case to make.

It’s perhaps notable that whoever compiled the ‘shit sheet’ skipped over a dozen or more of my tweets that were highly critical of the party’s handling of these issues. Perhaps a fulsome discussion about the problems in the Greens wasn’t what they had in mind.

The story ran on the Herald Sun’s front page on November 19th, 2018. After learning it would be featured on the front page, my employer sought my resignation and banned me from talking to journalists or responding in any way to the story. I quickly spiralled into sheer panic. A deep, suicidal depression soon followed, and after concluding I was a credible risk of self-harm (a conclusion I knew to trust from bitter personal experience), I checked myself into hospital. It was bad enough that I was being presented as some kind of grotesque monster on the front page of the largest-circulating newspaper in the country, but to know that I had lost the support of the political movement I’d dedicated myself to, as well as the MP I worked for — a person I admired more than anyone — was too much to bear.

During this period and in the two years since, I got no support of any kind from the Victorian Greens. With few exceptions, the people in the party who I’d come to see as close friends disappeared completely. In the few online discussions among Greens campaigners that I could bear to read at the time, some came to my defense while others were disappointed and angry, seemingly having decided that the Herald Sun was a more credible source on my character than their own experience. To be fair, with the way the posts were presented, it would have been an easy conclusion to draw. Reading these discussions while being afforded no opportunity to respond, explain or contextualise, was an experience of profound helplessness and despair.

In the months that followed, I avoided going out in public, and if I saw someone I knew out and about, I would try to escape or hide — especially if knew them through politics. I had no way of knowing what conclusion people had drawn about me, and I felt like anything I said in my own defence would only dig myself in even deeper.

If you find yourself in a position where you have to explain that you don’t support child pornography, you’re already fighting a losing battle.

On a number of occasions, the experience of being in public and seeing someone from the party would prompt panic attacks. It was absurd to find myself fleeing down an aisle of Northcote Plaza Coles, unable to function or think properly, my heart running in overdrive, feeling like my brain was at war with itself; all because I was afraid I’d been spotted by a kind and quiet lady I’d been on campaigns with.

Not long afterwards, I moved out of the area, but today, my habit of avoiding people in public has become an unavoidable part of my life. My friendship networks have shrunk to nothing because I’ve allowed most of my friendships to die by neglect. I am simply too afraid to face any kind of conversation about what happened, and the questions someone might ask. I’m too afraid of the idea that none of this can be explained away, that someone’s question or response will end up haunting me. Two years later, thinking about this still pushes me towards suicidal ideation, even after years of medication and intensive, regular psychotherapy. This is perhaps why it’s taken me so long to tell my story.

I’ve been unable to secure any work in my field since this event. Part of this is about the disastrous reputational damage the article caused, but too often, anxiety about placing myself up for scrutiny by a prospective employer, knowing what they’ll find if they google my name, has stopped me from even applying. I’ve been lucky to find relatively stable but low-paying labouring work, and have gratefully had the support of my partner. Without these things I’m unlikely to have made it this far.

The only place where people truly understand what happened to me is on Twitter. Most Twitter users see exactly how dishonest these attacks were, and recognise this ordeal could happen to any number of people who engage with politics on Twitter, especially if they use memes, irony, jokes and referential language to talk about and understand the world. It’s perhaps no surprise that I have become even more excruciatingly online over this time.

A few weeks ago I guested on Floodcast, a podcast co-hosted by a young Greens volunteer who was targeted by similar tactics in the recent Queensland state election. It seems in Victoria, the ALP saw how devastating it could be to target the Greens by sending strategically dishonest interpretations of campaigners and staffers’ private social media posts to the Murdoch press, and decided to adopt the tactic nationwide. Thankfully in this instance it didn’t work, and the Labor member lost her seat to Greens candidate Amy McMahon.

I was encouraged to see Amy come out in full support of the campaigner who’d been targeted. She even mentioned me in her Facebook post about the event. “Scouring social media to misrepresent tweets to generate some fake moral outrage is condemning an entire generation who grew up with social media,” she wrote. “I got into politics to fight alongside and on behalf of ordinary people – not throw them under the bus when the rich and powerful come after them for having the audacity to get involved in politics.”

After reliving my own ordeal as someone else was targeted with the same tactics that had laid me to waste, Amy’s Facebook post reduced me to great big sobbing tears of gratitude. I hope in future it provides a model for how the party responds to this sort of nonsense.

19 thoughts on “Some Words on Character Assassination”

Check it out on Soundcloud

Buy it on Bandcamp